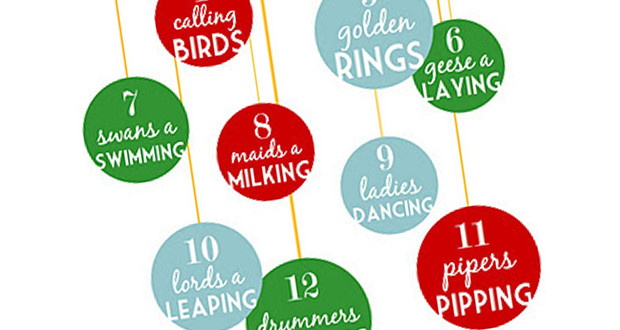 ’12 Days of Christmas’ Gifts Rise only 0.6 percent in Price; Swans Removed Because of Price Volatility

True Loves are on full display this holiday season, on their merry way to a more robust and satisfying holiday shopping season, according to the annual PNC Christmas Price Index.

To purchase the gifts included in the classic holiday song “The 12 Days of Christmas,” it will only cost 0.6 percent more than in 2016, according to the 34th annual holiday economic analysis by The PNC Financial Services Group.

PNC calculated the 2017 price tag for The PNC Christmas Price Index at $34,558.65, approximately $200 or 0.6 percent more than last year’s cost and less than the government’s Consumer Price Index, which increased 2.2 percent through September for the past 12 months.

The cost of Christmas presents

The cost of each item was revealed last month on PNC’s interactive website (pnc.com/ChristmasPriceIndex), which teaches consumers about the index and features a historical comparison of index data. Of the 12 items measured by the index, nine remained the same price as last year. This year’s insights include:

»A Partridge in a Pear Tree: The overall price for this top-of-list item increased 4.7 percent, but not because of the Partridge. The pear tree increased 5.2 percent, from $189.99 to $199.95 due to increased cost of living for workers and the limited supply of larger, more mature trees.

»Gold Rings: The largest growth rate in this year’s index was the cost of Five Gold Rings, which jumped 10 percent due to increased demand and popularity. Prices had remained steady at $750 during the last five years.

»Lords-a-Leaping: Despite wages rising modestly and a tight job market, only the Lords-a-Leaping saw an increase, as prices jumped two percent to $5,618.90 after two years of stagnant growth.

For those True Loves who prefer the convenience of shopping online, the PNC Christmas Price Index also calculates the cost of “The Twelve Days of Christmas” gifts purchased on the Internet. As Internet prices tend to be higher due to travel and shipping costs, True Loves will have to splurge $45,096 ($10,538 more than in store purchases) for the convenience of online shopping this year.

The History of Christmas Past

A PNC predecessor bank in Philadelphia began estimating the cost of the 12 Christmas gifts in 1984 as a holiday client letter. This year’s price is 83 percent higher than the inaugural report 33 years ago.

As part of its annual tradition, PNC also tabulates the “True Cost of Christmas,” which is the total cost of items bestowed by a True Love who repeats all the song’s verses. Purchasing all 364 gifts will require $157,558, up approximately $1,000 from last year and more than $57,000 from 1984.

The PNC index’s sources include retailers, hatcheries, the Philadelphia-based PHILADANCO and the Pennsylvania Ballet Company.

The education of Christmas yet to come

The PNC Christmas Price Index website pnc.com/ChristmasPriceIndex also includes a downloadable coloring book for kids of all ages and interactive educational tools for teachers to help their students learn about the stock market. Each year, educators across the country use the PNC Christmas Price Index to teach middle and high school students about inflation and economic trends.

Teachers who visit the site will have access to a lesson plan from the Securities Industry and Financial Markets Association (SIFMA) (www.sifma.org/foundation) that explains the PNC CPI, its significance and how to interpret its results. The activities in the lesson plan also help students make predictions about this year’s cost of Christmas. The SIFMA Foundation is dedicated to providing youth of all backgrounds with an understanding of the capital markets. Its most popular program is The Stock Market Game™.

The PNC Financial Services Group, Inc. (NYSE: PNC) is one of the largest diversified financial services institutions in the United States, organized around its customers and communities for strong relationships and local delivery of retail and business banking including a full range of lending products; specialized services for corporations and government entities, including corporate banking, real estate finance and asset-based lending; wealth management and asset management.

Carolina Panthers Owner Jerry Richardson seriously dropped the ball on his franchise amidst sexual and racial misconduct allegations, and has quickly announced plans to sell the team.

According to multiple media sources, the owner opted to long snap the team at the conclusion of the 2017 NFL season.

The announcement came just hours after a Sports Illustrated article “outlined allegations of sexual and racial misconduct by Richardson toward former Panthers employees.”

In a statement, Richardson said, “I believe that it is time to turn the franchise over to new ownership. Therefore, I will put the team up for sale at the conclusion of this NFL season. We will not begin the sale process, nor will we entertain any inquiries, until the very last game is played. I hope everyone in this organization will be firmly focused on just one mission: To play and win the Super Bowl.”

Richardson’s statement “did not address the allegations of misconduct.” The SI article “detailed the alleged ‘significant’ monetary settlements with at least four” former team employees as a result of “inappropriate workplace comments and conduct by Richardson.”

The conduct included “sexually suggestive language and behavior, and on at least one occasion directing a racial slur at an African-American Panthers scout,” according to Sports Illustrated.

Here we go again! The Spin Cycle can hardly keep up with the despicable sexual harassment tsunami that is sweeping the world – and toppling the mighty, the powerful, the putrid – from “above the law” movie moguls to corrupt politicians to sports stars to franchise owners.

The world is finally saying “no!” Decent women and men – fed up with the outrage – are putting on the gloves and delivering knockout punches. And the bad billionaires are crumbling!