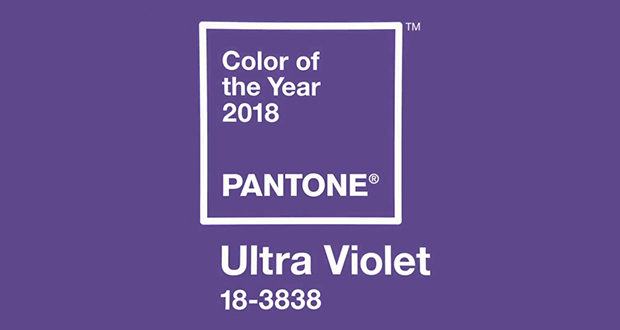 The color of the year for 2018 is ultra violet, according to Pantone Color Institute, a color consulting company that each year chooses a color that symbolizes design trends and our cultural mood.

Pantone called the 2018 color “dramatically provocative and thoughtful” in its announcement.

Pantone’s 2018 color follows 2017’s choice of “greenery,” which the institute said at the time provided “the reassurance we yearn for amid a tumultuous social and political environment.”

Complex and contemplative, ultra violet suggests the mysteries of the cosmos, the intrigue of what lies ahead, and the discoveries beyond where we are now. The vast and limitless night sky is symbolic of what is possible and continues to inspire the desire to pursue a world beyond our own, according to the institute.

Enigmatic purples have also long been symbolic of counterculture, unconventionality, and artistic brilliance. Music icons Prince, David Bowie, and Jimi Hendrix brought shades of ultra violet to the forefront of pop culture as personal expressions of individuality. Nuanced and full of emotion, the depth of the PANTONE 18-3838 ultra violet symbolizes experimentation and non-conformity, spurring individuals to imagine their unique mark on the world, and push boundaries through creative outlets.

Historically, there has been a mystical or spiritual quality attached to ultra violet, according to Pantone. The color is often associated with mindfulness practices, which offer a higher ground to those seeking refuge from today’s over-stimulated world. The use of purple-toned lighting in meditation spaces and other gathering places energizes the communities that gather there and inspire connection.

Pantone’s color of the year has been running since 2000 — past winning hues include “serenity,” “marsala” and “chili pepper.”

The Pantone Color Institute is a consulting service within Pantone that forecasts global color trends and advises companies on color in brand identity and product development, for the application and integration of color as a strategic asset. Recognized around the world as a leading source of color information through seasonal trend forecasts, custom color development, and palette recommendations for product and corporate identity, Pantone Color Institute partners with global brands to leverage the power, psychology and emotion of color in their design strategy.

This is not because TV ads are declining – TV ad spending is still flat or slowly growing, depending on the year. And in most cases, large TV advertisers have yet to move much of their budget over to digital, even though Facebook, Google, Twitter, LinkedIn and other social media platforms are working diligently to make that happen.

But you can expect that gap to keep growing. In 2018, Magna expects digital ad spending to grow by 13 percent to $237 billion, while TV ads will grow 2.5 percent to $183 billion, in part to such one-off events like the Olympics and the U.S. mid-term elections.

By 2020, Magna expects digital ads to make up 50 percent of all ad spending.

What’s in a name? For Wal-Mart Stores Inc., it’s what’s not in the name that counts.

The world’s largest retailer recently announced plans to change its legal name to Walmart Inc. on Feb. 1, the start of its next fiscal year. The tweak reflects how customers commonly refer to the company, and supports its aim to serve customers both in physical stores and online.

“Why the change? Because of our growing presence as a retailer who serves customers no matter how they choose to shop,” Doug McMillon, chief executive officer, said in a blog post on the company’s website. “Most of us, and I’d guess all our customers, refer to our company as Walmart.”

McMillon has sought to position the company as an e-commerce powerhouse – and a rival to Amazon.com Inc. – by acquiring web retailers like Jet.com and Bonobos, offering two-day free delivery, and hiring Ivy Leaguers to help run its internet operations. It’s also teaming up with Google on voice-activated shopping. The push has led to online sales growth of at least 50 percent in the U.S. over the past three quarters, more than triple the pace of the broader e-commerce sector.

“This action is simply harmonizing the corporate name with the customer-facing name on the stores, both physical and digital,” said David Schick, an analyst at Consumer Edge Research. “This shift has been underway for some time.”

The company was known as Wal-Mart Inc. when it incorporated in 1969. It was changed to Wal-Mart Stores Inc. the following year, when it went public.

McMillon said the change will not affect the cheer that employees commonly do during some meetings, where they spell out the name “Wal-Mart” and shimmy their hips when reaching the hyphen, known as the “squiggly.”

“It’s important to have some fun at work, so for our associates in countries where your cheer calls for the squiggly, keep doing it!” McMillon said.

Movement Mic: Time’s ‘Person of the Year’ is #MeToo

Time magazine’s person of the year isn’t an individual – it’s a movement. A sexual harassment tsunami that is shaking society to its core, and making an impact on our culture forever.

First it was a story. Then a moment. Now, just months after women began coming forward in droves to accuse powerful men of sexual harassment and assault, it is a movement.

Time magazine has tapped “the silence breakers” its person of the year for 2017 referring to those women, and the global conversation they have launched.

The magazine’s editor in chief, Edward Felsenthal, said in an interview on the “Today” show that the #MeToo movement represented the “fastest-moving social change we’ve seen in decades, and it began with individual acts of courage by women and some men too.”

Emboldened by Ashley Judd, Rose McGowan and a host of other prominent accusers, women everywhere are speaking out about the inappropriate, abusive and in some cases illegal behavior they’ve faced. When multiple harassment claims bring down icons like Today show host Matt Lauer, and movie producer Harvey Weinstein, women who thought they had no recourse see a new, wide-open door. When a movie star says #MeToo, it becomes easier to believe the colleague who’s been quietly enduring for years.

For this bold movement, #MeToo is golden!