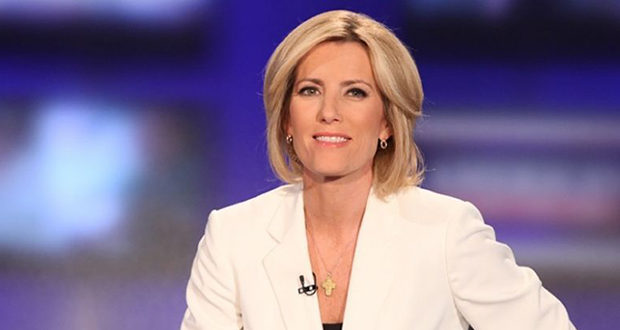 Dozens of advertisers may have dropped Fox News’ Laura Ingraham over her mockery of Parkland school shooting survivor David Hogg, but the network stood by her side.

In a statement, Fox News co-president Jack Abernethy said, “We cannot and will not allow voices to be censored by agenda-driven intimidation efforts. We look forward to having Laura Ingraham back hosting her program next Monday when she returns from spring vacation with her children.”

Ingraham and Fox News had previously noted that the vacation was preplanned, seeking to quell rumors that Ingraham’s absence was in response to last week’s earlier controversy with Hogg.

The host came under fire after ridiculing Hogg for being rejected from four colleges to which he applied. In response, Hogg called on his more than 500,000 Twitter followers to help start advertising boycott of Ingraham’s show.

The call to action worked to some extent, with more than a dozen advertisers distancing themselves from the show, including Johnson & Johnson, Liberty Mutual, Expedia, Trip Advisor, Nestle, Hulu, and Office Depot.

Ingraham eventually backpedaled from her earlier remarks, tweeting on Thursday that “any student should be proud of a 4.2 GPA” including David Hogg.

She returned to her Fox show, The Ingraham Angle, Monday night.

Facebook is scrambling to add safeguards against abuse of user data as it reels from backlash over the Cambridge Analytica scandal.

Now TechCrunch reported Facebook will launch a certification tool that demands that marketers guarantee email addresses used for ad targeting were rightfully attained. This new Custom Audiences certification tool was described by Facebook representatives to their marketing clients, according to sources. Facebook will also prevent the sharing of Custom Audience data across Business accounts.

This snippet of a message sent by a Facebook rep notes that “for any Custom Audiences data imported into Facebook, Advertisers will be required to represent and warrant that proper user content has been obtained.”

Once shown the message, Facebook spokesperson Elisabeth Diana told TechCrunch “I can confirm there is a permissions tool that we’re building.” It will require advertisers and the agencies representing them pledge “I certify that I have permission to use this data,” she said.

Diana noted that “We’ve always had terms in place to ensure that advertisers have consent for data they use but we’re going to make that much more prominent and educate advertisers on the way they can use the data.” The change isn’t in response to a specific incident, but Facebook does plan to re-review the way it works with third-party data measurement firms to ensure everything is responsibly used. This is a way to safeguard data,” Diana concluded. The company declined to specify whether it’s ever blocked usage of a Custom Audience because it suspected the owner didn’t have user consent. ”

The social network is hoping to prevent further misuse of data after Dr. Aleksandr Kogan’s app that pulled data on 50 million Facebook users was passed to Cambridge Analytica in violation of Facebook policy. That sordid data was suspected used by Cambridge Analytica to support the Trump and Brexit campaigns, which employed Custom Audiences to reach voters.

Recently Facebook brokers like Experian and Acxiom for ad targeting, closing a marketing featured called Partner Categories. Facebook is believed to have been trying to prevent any ill-gotten data from being laundered through these data brokers and then directly imported to Facebook to target users. But that left open the option for businesses to compile illicit data sets or pull them from data brokers, then upload them to Facebook as Custom Audiences by themselves.

The Custom Audiences certification tool could close that loophole. It’s still being built, so Facebook wouldn’t say exactly how it will work. I asked if Facebook would scan uploaded user lists and try to match them against a database of suspicious data, but for now it sounds more like Facebook will merely require a written promise.

All of this took place in the background as Facebook CEO Mark Zuckerberg took to Capitol Hill this week to testify before Congress, where he apologized about the scandal, and committed to vastly improve its policy on protecting users.

The most famous chant in the ad world was muzzled for the Masters.

“Dilly Dilly” was reportedly banned at Augusta National Golf Club, according to British golf publication Bunkered. That slogan was on a list of phrases that would get spectators ejected immediately from the tournament.

Fans of ads, beer, Super Bowl showdowns and pits of misery, however, love the phrase. It’s gained monumental traction as a celebratory phrase worth yelling at almost any social event, and it ended up being the centerpiece of a multi-part medieval ad series that culminated in the brand’s 2018 Super Bowl spot.

Bud Light, much like its campaign’s charmingly indifferent monarch, did not back down from the fight.

The brand fired back at the (not officially PGA-confirmed) reports by tweeting out a response from its fictional king, who is aptly named King John Barley IV. The tweet’s proclamation:

“Your king hath received word that the guards of the Green Jacket plan to escort any patron who dare utter Dilly Dilly off yon premises. Except for myself, I am against tyranny in all forms. So I have instructed my royal tailors to make 1,000 Dilly Dilly shirts that shall be delivered to Georgia in time for the festivities.

“For if thou cannot say Dilly Dilly, thou can still wear Dilly Dilly. Yours in friendship and beer, King John Barley IV.”

This sweet Augusta story began with Patrick Reed and Rory McIlroy in a final-round knot that flashed back to the 2016 Ryder Cup at Hazeltine National Golf Club, where Reed got the best of McIlroy in a singles match for the ages.

And this Masters ended with Reed rebuffing the challenges from a surging Rickie Fowler and resilient Jordan Spieth, to win at Augusta National. It was Reed’s first victory in a major event, and it happened just down the road from where he led Augusta State to back-to-back NCAA titles.

Reed closed with a one-under-par 71 for a 72-hole total of 15-under 273. He finished one stroke ahead of Fowler, who birdied six of his last 11 holes to post a 67, and two in front of Spieth, the 2015 Masters champion. Spieth nearly erased a nine-stroke deficit with a scorching 64.

Unfortunately, McIlroy – one of the Spin Cycle’s faves – faded into the shadows of the azaleas and wilted under the pressure to hit perfect drives and putts to pull off a career grand slam, that on this Sunday, was just out of his grasp.

Reed was making his 17th start in a major, and other than a tie for second at last year’s PGA. Championship, he’s had paltry results. But this time, he put every phase of his game together. Reed played the par 5s in 13 under, one-putted 22 of the first 36 greens and never looked back.